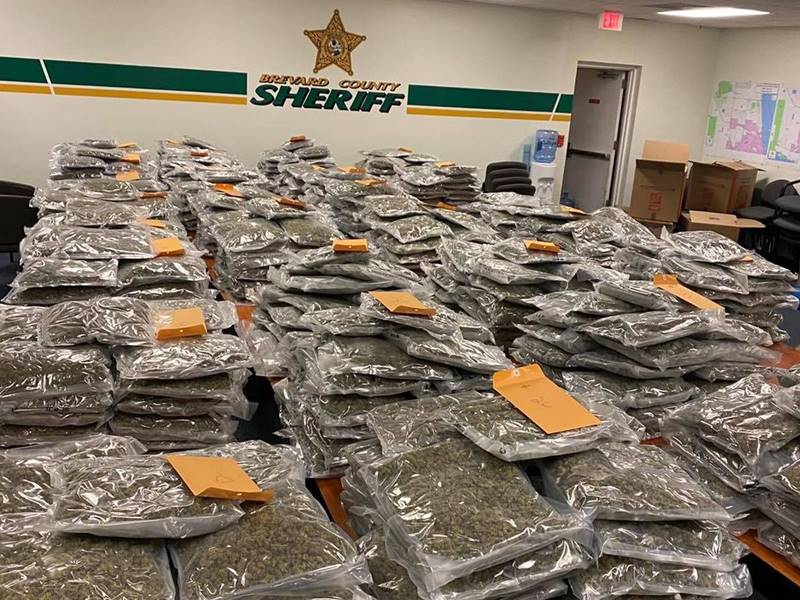 Imagine misplacing drugs with a street value of $2 million and authorities tempting the owner with a paid “staycation” if they claim it.

This is what has exactly happened in Brevard County, Florida, where a local sheriff is offering an “all-expenses-covered staycation” to the person or persons who lost their marijuana consignment weighing 770 pounds, which was confiscated from a storage facility in Viera.

Sheriff Wayne Ivey addressed the owner and said that if they are interested in getting their “property” back, then they should contact narcotics agents in his office and they will happily reunite them with the consignment.

“At some point in our lives we all have misplaced or lost something important and we live in the hope that some kind soul would find it and return it to the rightful owner,” Ivey said, adding, “As we at the Brevard County Sheriff’s Office always try to do the right thing, our agents are searching for the owner of the marijuana.”

The sheriff said as the street value of the contraband is $2 million, the least they can do is trying to identify the rightful owner.

“If the stuff belongs to you, come down to Criminal Investigative Services and claim it with absolutely no conditions attached,” he said.

The sheriff said once the rightful owner is properly identified, the “property” will be returned and the authorities will ensure that both the owner and the property are kept in a secure area so that no one will try to riff them off.

“The fact is that we are very excited to return something which is so valuable to the owner that we will also include an all-expenses-covered long staycation so that you can reflect on how much the lost property means to you,” Ivey added.

The body of a man, who was on a kayaking trip and had been missing, has been found by authorities on the shore of the Clear lake Thursday after four days of intensive search, authorities said.

Later that day, his girlfriend got in touch with the authorities reporting that he was not responding to her calls, which lead to a four-day long search.

A San Francisco resident, Flanagan, was staying near Clearlake Oaks in a rental home celebrating his birthday and job promotion when he went kayaking alone Sunday afternoon.

According to Lake County News, conditions were windy and there were high waves.

Though the Sherrif’s office couldn’t confirm where the deceased man was from, according to profiles on social media, he was from San Francisco.

The authorities said Flanagan’s girlfriend was able to contact him on his phone shortly after 5 p.m. on Oct. 10 when he told her that he was fine. But subsequently, when she tried to call him repeatedly later that night there was no answer. She then reported him missing and no one else had heard from him too.

A representational image of a green kayak. Image Credit: Pixabay.com

On Monday, a search team found the green-colored kayak which is believed to be that of Flanagan near Widgeon Bay, where he is believed to have gone missing.

A California fire crew found his body Thursday around 10.40 am on the lake’s shoreline near Olson Road, Clearlake Oaks. According to the Sherrif’s Office, an autopsy will be conducted in the coming week.

Five deaths have been reported on Clear Lake this year, with all but one occurring off the Clearlake shores, officials said.

San Francisco has been hit by an ongoing series of car break-ins. This time the latest incident happened along the Embarcadero.

A witness, who wished to remain anonymous, said he saw two persons breaking into cars around Pier 19 as he shouted at them to stop. Before driving off they dumped the luggage from the car and on reaching Pier 19½ they broke into another car, Kron4 reported.

The witness said he again shouted at them and started clicking photos. One seeing the witness taking photos, one of the thieves took out a gun and opened fire.

“I heard gunshots as he aimed the gun at me, I instinctively jumped behind a car standing next to me. They then got into the stolen vehicle and sped away,” the man told the outlet.

The witness, who luckily didn’t suffer any injury, said he was angry that such a thing was happening in the city in broad daylight and no one was trying to stop the thieves.

Hours later, the owners of the car turned up to find their cars gone.

One of the car owners speak to Kron4.

One of the victims said, “Something like this has happened to me twice in the city. The first time I was here I was mugged and now this. I have lived and worked in Detroit for 10 years and never has something like this happened. It is a pity that you come to this beautiful city and feel unsafe.”

Some of the dumped luggage was found and the finder contacted the owner, who immediately headed out to collect whatever was left of it.

One of the cars which were broken into had its rear windscreen smashed.

Undeterred by a security guard and a TV reporter recording his act, a thief raided a Walgreens store in San Francisco on a bicycle, with a garbage bag in his hand full of stolen goods.

The brazen shoplifting video, shot in June, was watched by millions. Critics say this underlines how epidemic thefts at retail stores have become in the city.

It was the fifth time the thief had targeted the same Walgreens store located on Gough Street in the Hayes Valley neighborhood, police said.

On June 19, the San Francisco Police Department said it had arrested the man, identified as Jean Lugo-Romero, 40. Investigators said he was responsible for a number of thefts in the Northern and Mission districts.

A video grab of Jean Lugo-Romero stealing goods inside the Walgreens store.

Lugo-Romero faces burglary and robbery charges for the five times he stole from that particular Walgreens store, including on four consecutive days in late May, early June.

Four months later, Walgreens said it has decided to close the stores plus four others in the city in November due to the continuing issue of organized shoplifting in San Francisco.

In an email to The New York Times, Phil Caruso, spokesman for Walgreens said, “Organized shoplifting has been a continuing challenge facing retailers in San Francisco. Retail theft across our stores in San Francisco are fives the average across our chain.”

Walgreens said professional thieves steal from their stores and then resell the goods through the online marketplace. According to police, most of the retail crime in the city is the handiwork of organized gangs.

In a board meeting in May, Walgreens’ representatives said the company had to close 17 stores because thefts had made doing business untenable at these stores.

Employees working in these stores will be shifted to other locations and customers will have their prescriptions transferred to nearby stores.