Large rats “the size of cats” are said to be entering houses in England by crawling up through toilets.

According to ACE Pest Control’s Andrew Dellbridge, rats have become “larger and braver” since the lockout.

“I was called out to one job in Norwich and the customer could barely speak, she was in so much shock,” he said.

“She’d been using the bathroom and heard a noise. She looked down and it was in the toilet bowl. And this is happening more and more frequently.” 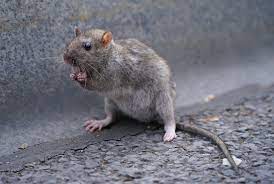 He said that he had also been informed of a couple being forced to vacate their house because it was ransacked by thee huge rats.

These “courageous” creatures are just becoming more daring. They’re becoming less hesitant to enter people’s homes, workplaces, and bathrooms after having the ability to go areas they wouldn’t have ventured to go previously since humans stayed at home during lockdown.

The British Pest Control Association (BPCA) reported a 51% increase in ‘rat activity’ during the lockdown.

Although you would assume that acquiring a cat might help, Dellbridge says, “A smart cat doesn’t appreciate a large rat, and I’m seeing cats with a tremendous flea issue right now.” As a result, you’d still have rats and fleas.”

Rats working their way up via the toilets are not only a scary urban myth; it’s actually pretty simple for them. When it comes to evicting long-tailed house invaders, cities have come up with some innovative methods.

Cork County Council in Ireland contemplated poisoning the sewage system with rat poison since an elderly gentleman was attacked on the buttocks by a rat that popped up his toilet. A charity in Chicago attempted to alleviate their rodent issue by releasing 1,000 wild cats onto the streets.

Perhaps an army of feral cats and rodent-eating herons is just what we need to deal with our rat problem.

It is likely that we’ll have to pick our battles between rodents disturbing people’s morning constitutionals and workers being too nervous to poop at work.