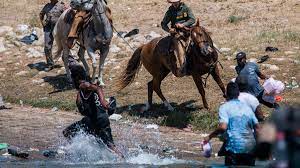 President Biden enraged Border Patrol personnel on Friday by backing the bogus claim that they were seen “whipping” migrants attempting to cross the Rio Grande into Del Rio, Texas, earlier this week.

At a news conference on Friday, Biden stated that the agents would “pay” for supposedly lashing the Haitian migrants, a tale propagated by journalists on social media despite video proof to the contrary.

“Would you go to work and do your best knowing that if you do your boss is going to ‘make you pay’?” one agent told Fox News. “I’m dumbfounded and don’t know what to say. Is the president threatening to throw us in prison?”

“I see the administration wants to fry our agents, he just started a war with Border Patrol,” said another agent. 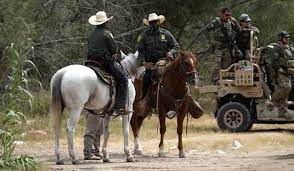 The National Border Patrol Council’s chairman, Brandon Judd, told Fox News that the inquiry has already been biassed against the agents since Biden has already judged them to be guilty.

The border security agents who were in the viral video were, in reality, weaving their reins so that their horses remained in control and did not lash out at the migrants with them, explained a former mounted Border Patrol supervisor explained to National Review.

“It’s a training tool, and it’s a training aid if a horse does not want to cooperate with its rider,” explained George Syer, a retired horse patrol coordinator in the Rio Grande Valley and Border Patrol supervisor.

In fact, the story was dismissed at the beginning by even the Secretary of the Department of Homeland Security Alejandro Mayorkas, but then backtracked when Biden blasted the officers in front of reporters, later appearing on CNN to explain that “one cannot weaponize a horse” against migrants.

Judd went on to say that the agents were merely carrying out instructions and commands issued by the executive branch, which Biden oversees. He stated that many agents took Biden’s statements as a betrayal, which he did in order to maintain favor with his followers, who criticized the event without studying the facts on the ground.