Anti-mask leader Calleb Wallace, who organized and ran several protests in the U.S. against the use of face masks and other implementation of COVID19 restrictions succumbed to the virus Saturday, after fighting for his life in the hospital for a month.

Caleb, 30, who became popular in the United States after organizing a protest in San Angelo Texas, is waiting for his fourth daughter to be born before he passed away.

According to his wife, Jessica Wallace on the family’s GoFundMe site, “It wasn’t perfect, but he loved his family and daughters more than anything.”

Caleb was also the co-founder of San Angelo Freedom Defenders whose goal, which was posted on Facebook, was to “educate and empower citizens to make informed decisions about local, state and national politics and to encourage them to participate actively in their duty to ensure the rights granted by God and constitutionally protected.” 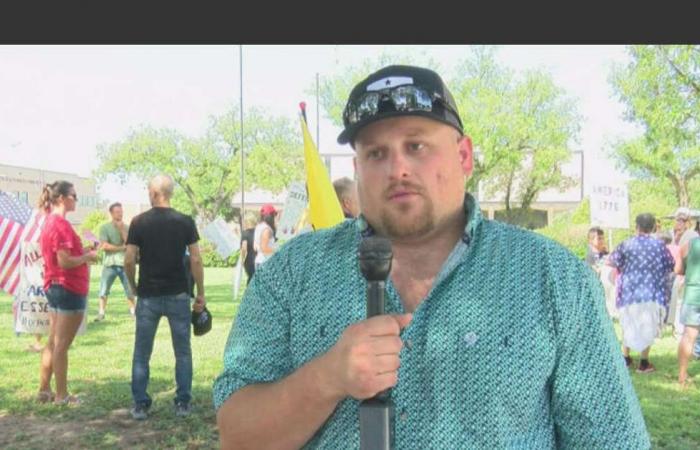 Most of his speeches during protests were around the ideas of dangerous conspiracy theories, – which discards scientific facts – and promoting practices that jeopardize public health.

One of his appeals is the right to refuse to wear a mask since it is not efficient protection against the spread of the COVID19.

Wallace, who was insistent in his disagreement with public policies, initially refused to go to the hospital when he first started feeling ill on July 26. Instead, he stayed at home and took Ivermectin, an antiparasitic medicine intended for animals. Along with Ivermectin, he also took Vitamin C and Zinc lozenges.

Wallace was admitted to the hospital on July 30 where he was diagnosed with COVID-19. His health worsened rapidly and was in the ICU since then.

He was unconscious from August 8 until his death last Saturday.

Jessica Wallace, a day just before Caleb’s death, published, “To those who wish death, I regret that their views and opinions caused them some hurt. I have prayed that he came out of this with a new vision and a greater appreciation for life. I can’t say more because I can’t talk to him.”

The AFP agency’s latest count of COVID19 related deaths all around the world is at 4, 500, 620 since the beginning of the pandemic.

He also wrote on Stimulus check news, which helped millions across the US.
He likes topic tips on taxes, checks, and health. When he is on leisure, he also pens on gaming. You can read his stories here and email him at shalgar[email protected]